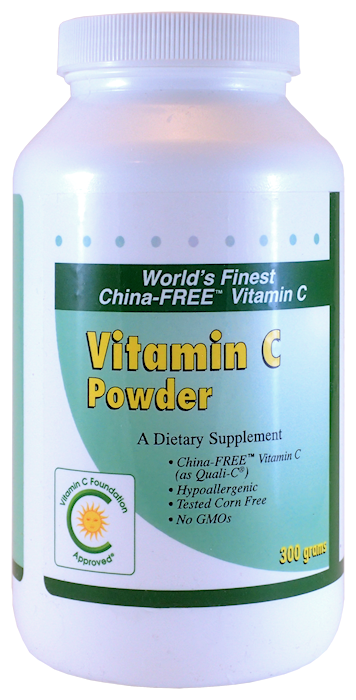 Your purchase supports the nonprofit Foundation.

About the World's Finest Vitamin C:

Note: The Vitamin C in all our products is DSM Quali-C manufactured in Europe to the highest standards.

Why Choose the Ascorbic Acid form of Vitamin C?

Vitamin C comes in various forms. Its most common form, however, is Ascorbic Acid (Hydrogen Ascorbate). Many people use the terms "vitamin C" and "ascorbic acid" interchangeably.

The world's leading clinical vitamin C expert, the late Robert Cathcart,III, M.D., believed that ascorbic acid was twice as powerful as any other form of vitamin C.[]

"I noticed that it was not entirely clear that the dramatic effects are always with ascorbic acid orally and sodium ascorbate intravenously. I have not been able to achieve the ascorbate effect with mineral ascorbates orally.

Vitamin C is defined as the substance that cures the deficiency disease scurvy. This separates the ascorbates from the ill-defined "natural vitamin C complex." Note that any "natural" complex, minus ascorbic acid, does not and cannot cure scurvy, and therefore, cannot be Vitamin C.
When Other Forms of Vitamin C Are Better

Pure vitamin C powder is the form of the vitamin that we approve. No fillers.

For those that find ascorbic acid powder hard to swallow, it is easy and inexpensive to make your own capsules. Check out your local health food store for generic capsules and the do-it-yourself capsule making kits.

ATTENTION: There are two prices for all approved products - regular retail and a lower priced option for recurring automatic reorder/shipment labeled "Automatic Shipping," or AUTOSHIP.