Ascorbic acid (C6H8O6) is the most common form of vitamin C. "It is an essential food for human beings. People who receive no ascorbic acid become sick and die." - Linus Pauling (Vitamin C and the Common Cold, 1970).
"Ascorbic acid (vitamin C) is one of the important water soluble vitamins. It is essential for collagen, carnitine and neurotransmitters biosynthesis. Most plants and animals synthesize ascorbic acid for their own requirement. However, apes and humans can not synthesize ascorbic acid due to lack of an enzyme gulonolactone oxidase. Hence, ascorbic acid has to be supplemented mainly through fruits, vegetables and tablets." Read the full article "Vitamin C in Human Health and Disease is Still a Mystery? An Overview"

Continuing Education for Every Medical Doctor and Registered Dietician

What is Vitamin C?

Most writers use "vitamin C" and "ascorbic acid" interchangeably. However, ascorbic acid is but one form of vitamin C. 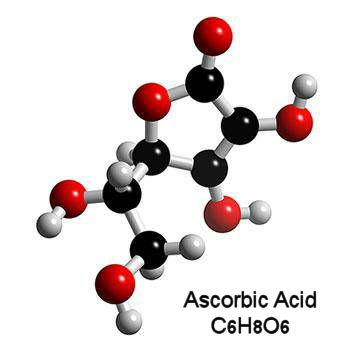 Technically vitamin C is the ascorbate ion (C6H7O6) so every form of vitamin C has this anti-scurvy factor. Vitamin C comes in many forms because the vitamin C part (C6H7O6) easily combines with other atoms and molecules. For example, the ascorbate fraction rapidly attaches to hydrogen, sodium, calcium, magnesium and potassium atoms.

Chemists call the difference between the same molecules their chirality. Linus Pauling explained that there are exactly four different shapes (stereoisomers) the ascorbate ion can take: L-ascorbate, D-ascorbate, LD-ascorbate and DL-ascorbate.
Linus Pauling the chemist also told us that only the L-ascorbate shape has vitamin C activity, i.e. only the L- shape can cure the vitamin C deficiency disease scurvy.
What if All Vitamin C Isn't Created Equal?

The following has not been verified accurate by the Foundation

Vitamin C - What do you Need?

"While known to scientists like myself, the public and most doctors are totally unaware that synthesizing vitamin C produces two very different molecules. These are: D-ascorbate and L-ascorbate. Almost all the vitamin C on the market is roughly a 50/50 mixture of the two. Only the L-ascorbate is biologically beneficial to the body. D-ascorbate is an irritant to the body, and there are indications that a lot of D-ascorbate could be detrimental to health.

Over the years that I have recommended vitamin C, many have complained that vitamin C irritates their stomach. Yet, when they take high-quality vitamin C, this doesn't happen. It's the D-ascorbate contaminant that's the problem. Those who are supplementing with regular commercial vitamin C need to know that half of what they are paying for is biologically useless, a waste of money and perhaps even detrimental. Another issue is that even vitamin C from natural sources degrades. For example, a fresh orange is almost all L-ascorbate. Once extracted to make orange juice, it will, in a matter of days, degrade to become a 50/50 mixture of D- and L-ascorbate" - Raymond Francis www.beyondhealthnews.com/wpnews/index.php/2013/09/vitamin-c-what-do-you-need

Is Vitamin C Really a Vitamin?

Scientists are now using the more technically correct term ascorbate, instead of vitamin C, especially when referring to dosages higher than the 10 to 60 milligrams daily that prevent death from acute scurvy.

Most vitamins are readily available in food and are only required in minuscule amounts by the animals that eat the food. It is true that tiny amounts of vitamin C (around 10 milligrams daily) can keep human beings alive by preventing death from the vitamin C deficiency disease scurvy. Therefore, the RDA (60-90 mg) keeps most of us alive.

There is something different about vitamin C.

The intellectual argument whether vitamin C is more than just a vitamin is based on the theory of evolution. Genetic deletions are common, yet most plants and animals make their own vitamin C. Very few species have survived to the present day after losing their innate ability to make vitamin C.

According to British nutritionist Patrick Holford,

"Vitamin C, ascorbic acid C6H8O6, isn't a vitamin for most species. It is not a necessary component of the diet, at least for all mammals with the exception of guinea pigs, fruit eating bats, the red vented bulbul bird and primates - which includes us. All other species make their own." - Read full article: How Much Is Enough?

Another clue that we evolved to require more ascorbate than is in our food is the amount of vitamin C animals make for themselves: thousands of milligrams (not tens of milligrams), far more than nutritional authorities recommend. [ * ]

High dosages of ascorbate have been found to make many people feel better, making the case that ascorbic acid (C6H8O6) is not just a vitamin in the commonly used sense of the word.

SYNTHETIC VITAMIN PRODUCES STRIKING UNEXPECTED CURES
September 22, 1934 (Science News)
"Synthetic vitamin C, called ascorbic acid, in its first actual use on medical patients is producing very striking and unexpected disease conquests, the British Association for the Advancement of Science was informed by Prof. A. Szent-Györgyi, the Hungarian chemist who played a major role in the artificial manufacture of this important vitamin.

The mouth disorder known as pyorrhea, a certain kind of hemophilia, which is a disease of bleeding, certain forms of hemorrhagic nephritis, and several other diseases against which medicine was helpless are seemingly being cured by ascorbic acid. Ascorbic acid is not a cure for hereditary hemophilia.

'This is the more striking since these pathological conditions have not been thought to be connected with lack of vitamin,' Prof. Szent-Györgyi explained. 'These curative effects suggest that humanity is suffering much more gravely from a lack of vitamin C than has hitherto been supposed.'

Disfiguring colorations of the skin brought on by illness are also made to disappear by ascorbic acid. Patients with Addison's disease, who have a yellow color, can be bleached out again by the use of this substance."

Why Do We Need More Vitamin C than the RDA?

The government's current recommended daily allowance for vitamin C is around 70 milligrams. (See our RDA)

The intriguing question is whether larger-than-recommended amounts of vitamin C improve the health of human beings?


"Based on ascorbate calibration, it is evident from Figure 3 that 80% of people require at least 10 g of ascorbate (vitamin C) daily for optimum physiological function, and this amount can be as high as 130g/day." - Russell Jaffe, MD, PhD
Figure 3: 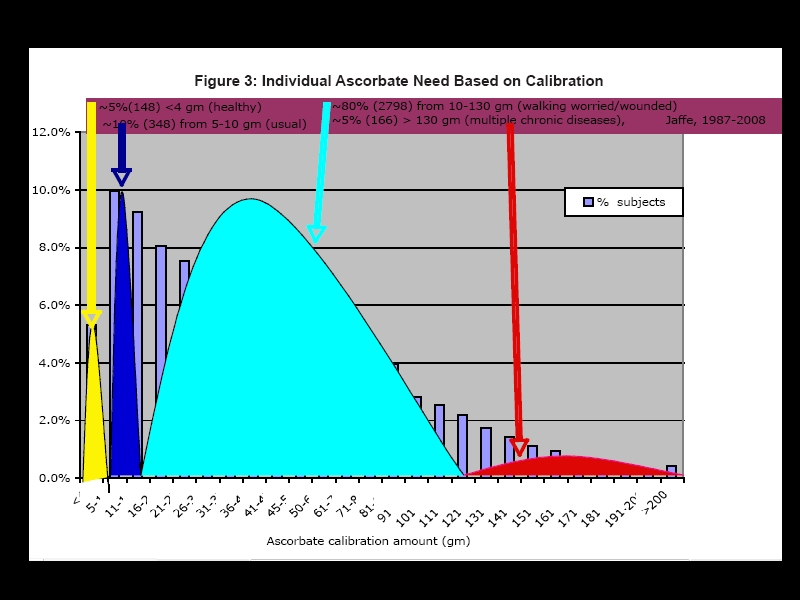 Ascorbate Calibration as measure of ReDox, methylation efficiency, and inflammation or repair deficit (PDF)
See Appendix I, Page 32 (Originally published in the Townsend Letter for Doctors and Patients.)

Setup: Determine the largest single dosage that will not cause diarrhea. (This step must be done ahead of time, i.e. right now, if you are not a regular vitamin C "mega" doser.) The one-time dosage is usually 1.5 gram (healthy people) or 3 grams (feeling poorly) or 6 (up to 12 grams - chronically ill).

Note: When you are well, you can use Dr. Jaffe's Calibration procedure to help you estimate how much vitamin C you should be taking daily. The optimal daily amount is usually put at 75% of your two-hour calibration.

The late Robert Cathcart, III, MD reported that in his clinical practice of over 13,000 patients, (and later over 20,000 patients), that he occasionally used more then 200,000 milligrams of vitamin C. This report is detailed in his original 1986 "Vitamin C: Titrating to Bowel Tolerance" paper. Cathcart reported that our need for vitamin C increases in response to illness or stress.

Nobelist and Chemist Linus Pauling became one of the world's foremost vitamin C experts. Pauling explained that there is a wealth of scientific research information that expands vitamin C's role past that of an ordinary vitamin.

There are now more than 100,000 studies, reports and peer-reviewed papers about vitamin C that have been published over the past 80 years. Linus Pauling alerted us in his book [*] that most medical students and orthodox dietitians are not aware of this research because it wasn't presented during their medical educations. - Owen Fonorow

Steve Hickey and Hiliary Roberts explain in Ridiculous Dietary Allowance why the current official recommendations are unscientific and inappropriate.

According to Linus Pauling, vitamin C deficiency is more common in human beings than generally believed.

The complete absence of vitamin C in the diet will cause death from the vitamin C deficiency disease scurvy. Nobelist Pauling felt that we are all dying a slow death from a low-grade form of scurvy.

It is a fact that Linus Pauling and associates Unified Theory of Heart Disease [*] implicates a sub-clinical vitamin C deficiency leading to a condition Pauling called chronic scurvy.

Cardiovascular diseases such as heart disease and stroke are the leading cause of death in the United States.

The erroneous idea that 200 mg of vitamin C is all our bodies can use daily arose out of important research by the Mark Levine group at the National Institutes of Health (NIH).

The NIH papers were analyzed by pharmacology professors Steve Hickey, Ph.D. and Hilary Roberts, Ph.D., and the errors were communicated to the NIH and other authorities. After normal scientific channels failed, these UK scientists authored two important books detailing the errors in the NIH research conclusions.

The basic flaw in the NIH research was not accounting for the short half life of ascorbate in the blood plasma. Using the NIH's own numbers, Hickey and Roberts developed their Dynamic Flow theory.
For those interested in the details of why our blood plasma and tissues do not "saturate" at 200 mg daily, please refer to:

Apparently the Linus Pauling Institute is aware of the faulty NIH research, but not of the Hickey/Roberts rebuttal arguments.
One major implication of the Hickey/Roberts' Dynamic Flow theory is that taking 500 mg of vitamin C orally every 3 hours maintains the highest steady-state blood plasma concentrations.

"The old name for scurvy was scorbutes; so vitamin C, once identified, was quickly christened a-scorbutic acid; or ascorbic acid. Ignore the deluded ninnies that think ascorbic acid is something evil and not real vitamin C! It's as daft as saying H2O isn't water! And before you write to tell me: ascorbic acid is the name for both natural and synthetic vitamin C and BOTH work just fine, because they are identical. - Dr. Keith Scott-Mumby The Vitamin That Conquered The World!

Is there really such a thing as natural vitamin C complex?

Such a complex can be defined, but it isn't vitamin C.

If such a complex really exists with vitamin C activity (minus ascorbic acid), this fact escaped the attention of all world scientists, including Linus Pauling. Such a complex is not reported in over 100,000 published studies, papers, reports and scientific articles regarding ascorbic acid (C6H8O6).

Vitamin C is defined as the substance that cures the deficiency disease scurvy. This separates the ascorbates (C6H7O6) from the ill-defined natural vitamin C complex. Note that any so-called natural complex, minus (C6H7O6) does not and cannot cure scurvy and, therefore, cannot be Vitamin C.

The official Vitamin C Foundation response to the Natural Vitamin C and C-complex arguments that are widely distributed across the Internet:

The Nature of Vitamin C (html)

Those who argue that a vitamin C complex exists, and is different from ascorbic acid, usually claim (falsely) that the Nobel scientist credited with isolating Vitamin C, Professor A. Szent-Györgyi, believed in the so-called natural C-complex. This rumor is based on early speculation and misquotes earlier writings by Dr. Szent-Györgyi. 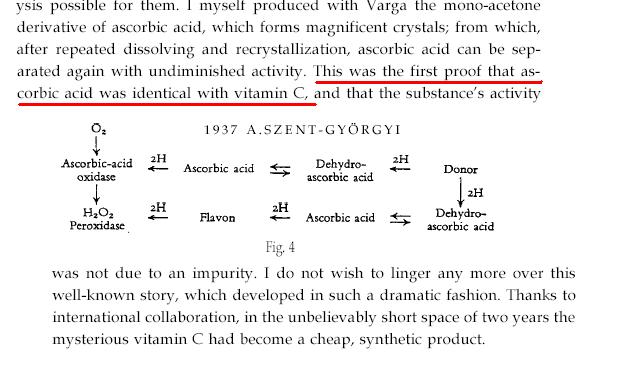